Iceland has a lot of folk tales about whales. These sea giants have always had great importance in Iceland’s history and culture, even before Iceland became such a popular whale watching destination. 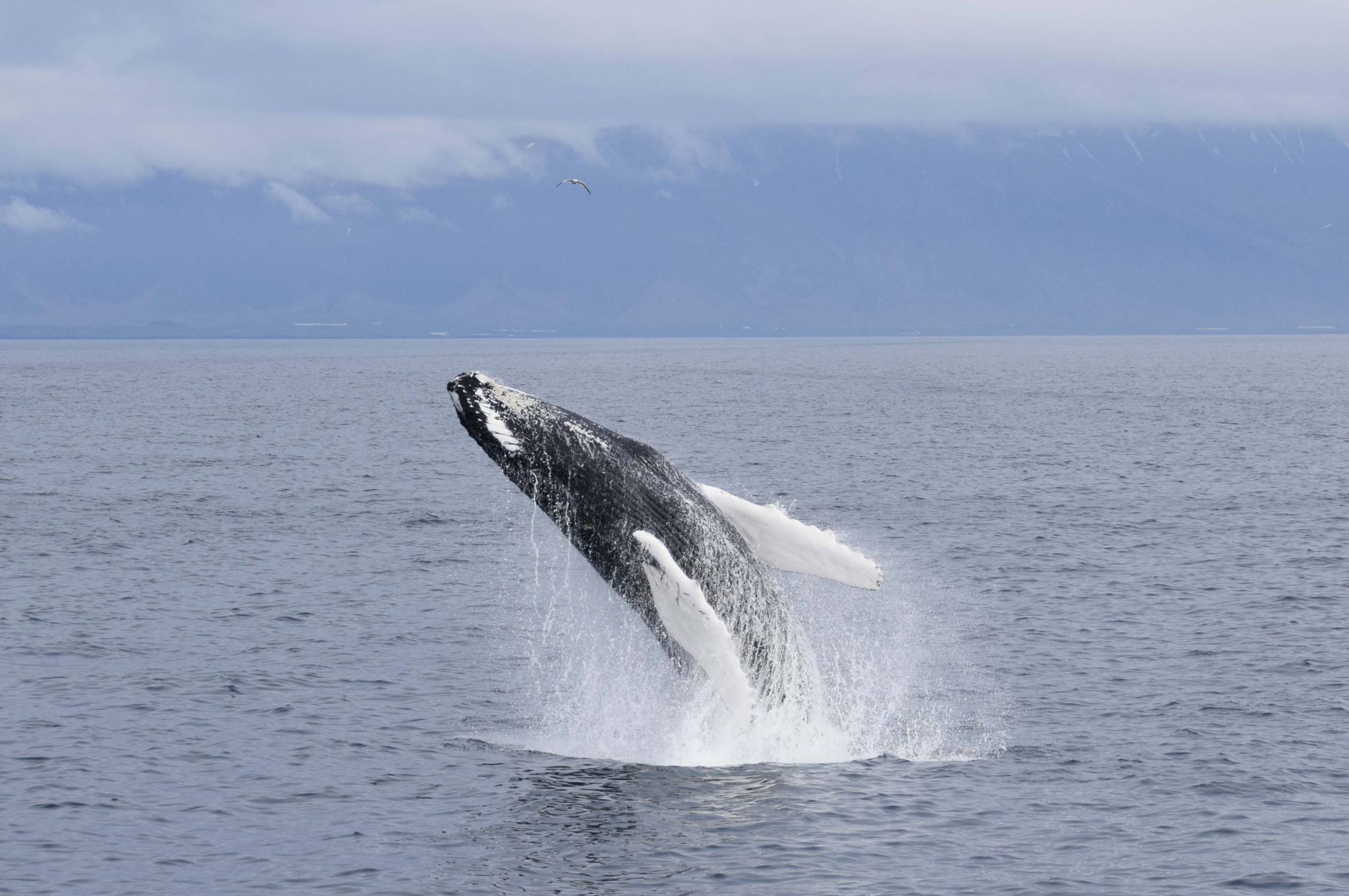 The first worldwide famous whale of Iceland, that helped the growth of whale watching as one of the most popular activities in Iceland, was Keiko, the orca/killer whale who played Willy in the famous Hollywood movie Free Willy.
Keiko was captured in Iceland and sold to several aquariums before he became a movie star. After a few years, thanks to the Free-Willy Foundation, Keiko was flown back to Iceland from the US. Keiko lived for a while in a bay off the Vestmannaeyjar islands, while he was being trained to learn to live in the wild.
After a few years, Keiko was released with a group of wild orca whales but after only one month he was found in Norway seeking human contact. A few months later Keiko sadly died in Norway, his reintegration into the wild had failed.
To learn more about Keiko, check out Whales of Iceland’s post.
Keiko’s story is very sad but it brought attention to Iceland, and the interest in whale watching became very strong.

Whale watching is now a very popular activity in Iceland. Tours leave from several harbors all around Iceland and there are many whale species that can be spotted in Iceland, depending on the location and the season.
The most common ones are the Minke Whales, which can be seen from almost all the whale watching ports in Iceland, including Reykjavik.
The White-beaked Dolphins are very easy to spot around Iceland, since they stay close to the shore all year round, often playing on the sea surface.
Harbor Porpoises can also be seen throughout the year around Iceland but they are relatively small and shy and they only appear for short moments.
Humpback Whales, famous for their quite acrobatic behavior, can be spotted during the summer, especially on tours from the Northern towns of Akureyri and Húsavík.
Orcas or Killer Whales can be spotted around Iceland during the summer months and in the winters around Snaefellsnes Peninsula, but since they travel a lot and do not stay for long in the same place, it is not always easy to see them.
In addition to these species, there are some other ones that can be spotted with some luck.
On a whale watching tour in Iceland you might be able to meet the huge Blue and Fin Whales, Sai Whales, Pilot Whales, Toothed Whales, Beaked Whales and more.
I am honestly not a whale expert but joining a whale watching tour is a great and fun experience. You will learn more about the gentle giants and it is so exciting to see them in the wild! 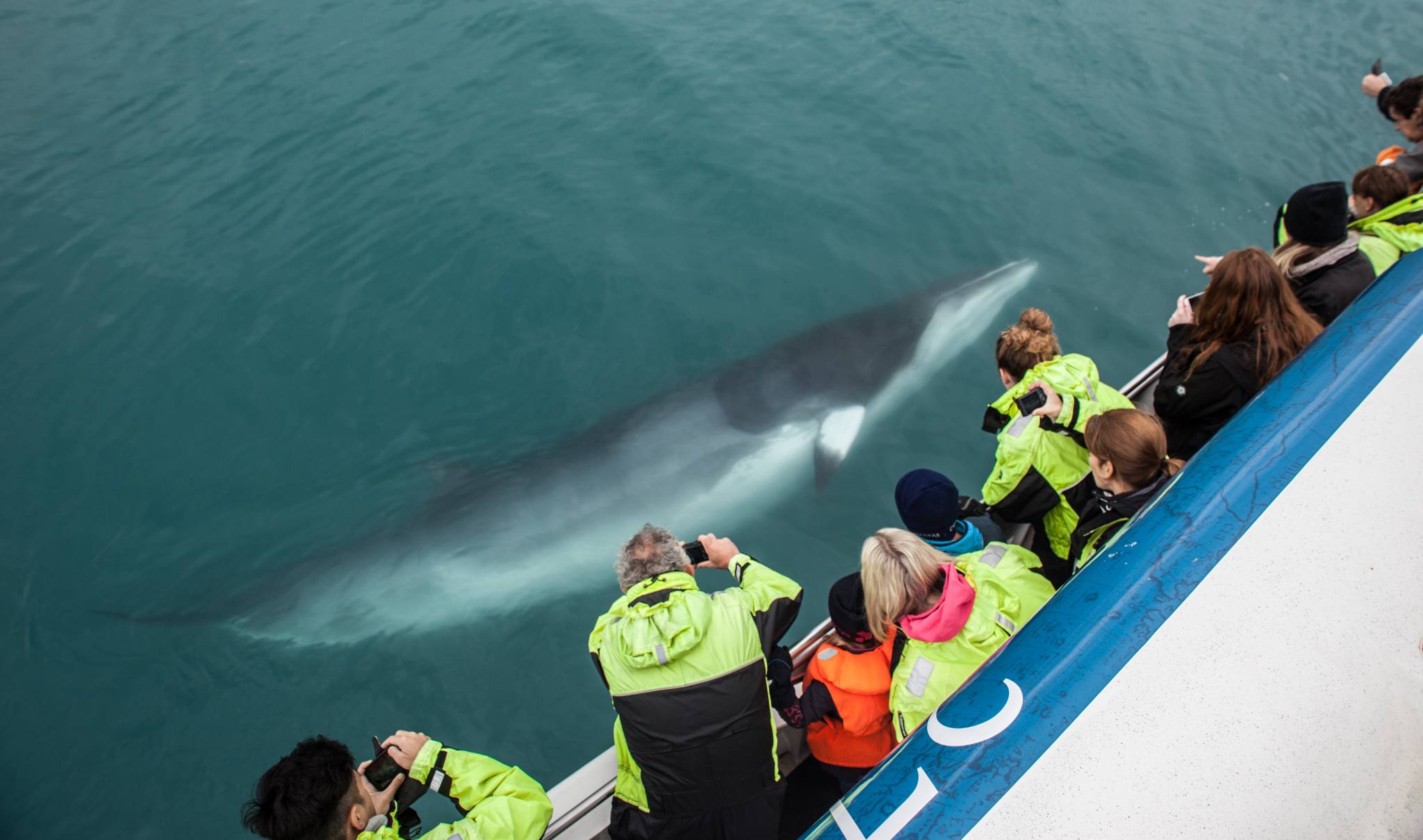 Meet us, don’t eat us

Meet us don’t eat us is the slogan for a campaign launched in 2010 to take whale meat off the restaurant menus for tourists.
The International Fund for Animal Welfare -IFAW says that “Meet Us Don´t Eat Us is a positive campaign because, although it deals with a serious subject, when we approach tourists and also Icelanders, we point out that the most sustainable way to enjoy whales is by responsible whale watching – better for whales and the Icelandic economy”

With the increased popularity of whale watching tours in Iceland, whale meat consumption has become less and less popular.
Although whales are still hunted in Iceland, just a small fraction of the meat is actually consumed by Icelanders.

Whales are beautiful animals. In Iceland, you have the chance to join a whale watching tour and meet whales in their natural habitat, as they swim in the ocean.
If boats are not your thing, you can visit Whales of Iceland, a fun and interactive exhibition where you can learn more about whales.

Whale watching is a great experience for everybody, old and young. It will surely make your trip to Iceland more memorable.